London Skyline as seen from the New Zealand High Commission

The City London is one the most widely known and most densely populated cities in the world. As one of the world’s 24 ‘mega cities’ it hosts a population of over 8 million in the Greater London Area and has been a major site of settlement for over two millennia. As a global city it is one of the leading area in the arts, fashion, transport, tourism, as well as being closely to the global financial market. However, London is also a leading site in more local commerce and street markets. Although these are sites for the trade of goods between mostly local people, they are still heavily involved in global trade processes just as much as the large financial institutions and banks that trade on the electronic stock market. In fact I would suggest their’s is a much more interesting story which involves people and things as opposed to ‘numbers on a screen’. In this piece I will attempt to use my own limited ethnographic observations of two London street markets, combined with some some theoretical perspective in order to take a grass-roots look at the impact of globalisation on local commodity markets and interactions between stall holders and their customers. In order to do this it is useful to consider individuals and their motivations first which may include an examination of their economic, cultural or political views. As Hannerz wrote, “There is now a world culture, but we had better make sure we understand what this means. It is marked by an organization of diversity rather than a replication of uniformity. No total homogenisation of systems of meaning and expression has occurred, nor does it appear likely that there will be one any time soon. But the world has become one network of social relationships, and between its different regions there is a flow of meanings as well as of people and goods” (Hannerz, 1990 p.237)

We began the first day of the field trip in Walthamstow.

This market is known for being the longest (although not the largest) daily street market in Europe and occupies a kilometre of Walthamstow’s High Street with around 100 stalls selling goods ranging from fruit and vegetables to clothing and electronics. This large market also boasts a wide diversity of cultures and different ethnicities in both the products it sells the people who buy and sell at the market. One of the most prominent ethnicities on the market was Pakistani which wasn’t surprising considering the demographic figures for the borough of Waltham Forest that show Pakistani to be the largest ethnic minority with 10% of the local population. One stall was selling large stainless steel cooking pots that are commonly used in Asian cuisine. We were told that these had been specifically imported from the middle east which came as a surprise as we expected that they could be made cheaper in China. However, this helped me answer a major question that I’d had as someone who never buys from market stalls…I wanted to understand their appeal for customers.

Markets offered niche foreign products that may be more authentic and of interest to the ethnic minority communities in Walthamstow. The large supermarket chains such as Tesco or the nearby Sainsbury’s store would not stock these type of items. In fact there seemed to be a lot of resentment for the supermarkets. A stallholder selling fruit and vegetables told me that he didn’t think very much of the quality of the produce sold in the supermarkets and that there’s better value for money when buying from the market.

One of the many fruit and vegetable stalls

Building relationships with customers seemed to be a vital part of the market’s success especially for stallholders selling relatively low value items such as fruit and vegetables. They were keen to be friendly when interacting with customers, presumably with the hopes of repeat custom. In this way, it felt as though the market conversation and ‘banter’ provided customers with some social interaction that wouldn’t be possible in supermarkets. Similarly, many of the stallholders appeared most comfortable when they were speaking to each other in their native languages and appeared to act less confidently when speaking English. Although I did not notice any animosity between the diverse ethnic groups that made up the market I was reminded of the work of Humphrey and Skvirskaja who wrote about the experiences of ethnic minorities in Odessa, Ukraine, “This does not prevent many of these urban dwellers – whom I refer to as ‘wider society’ and who represent the city’s predominantly Slav majority – from keeping clear of various ‘others’ or from keeping them at bay…Both the Roma and Afghanis by contrast, and despite their recognised tendency towards insularity , do not seem to consider avoidance and indifference as viable options. For them, as we shall see, avoidance of wider society is not really an option.” (Humphrey and Skvirskaja, 2010 p.95)

However, I don’t think this same procedure applies to a city like London. London is such a diverse city that ethnic minorities are able to cater to and sell to people exclusively from their own communities. I noticed this in the different types of Butchers shops at Walthamstow market: 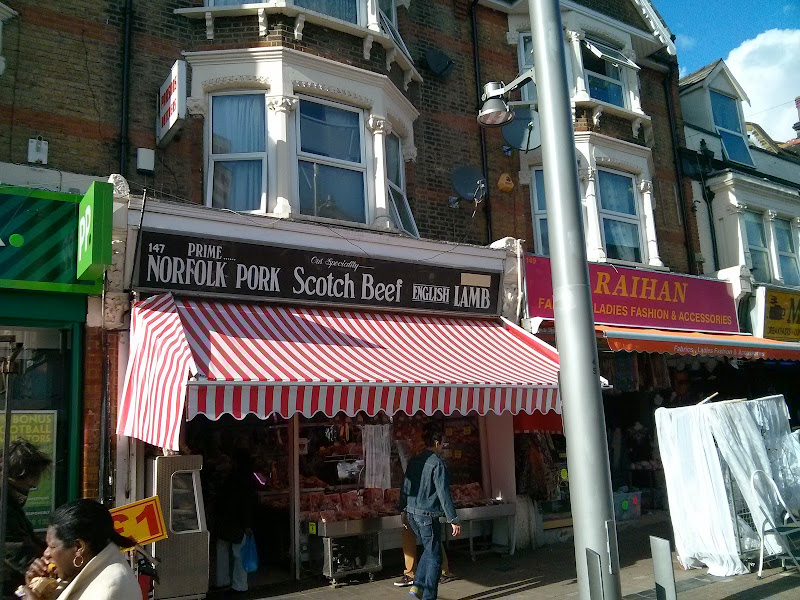 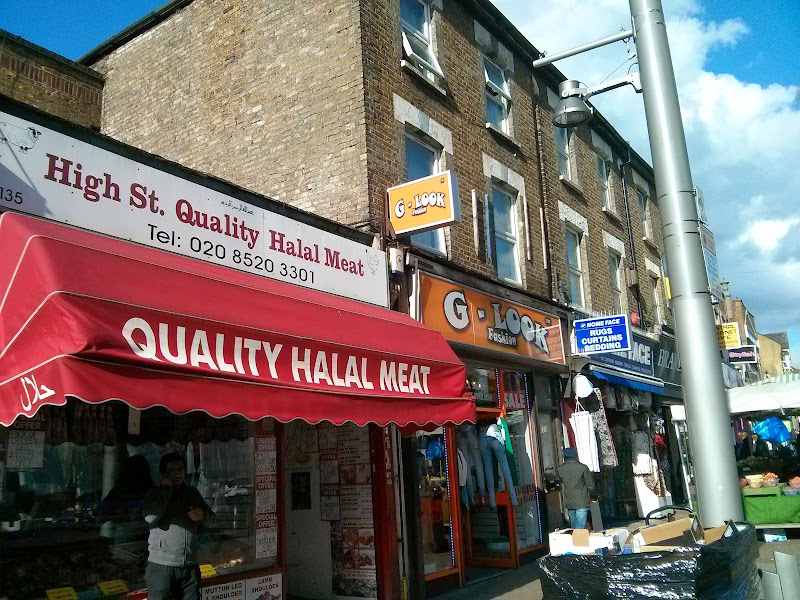 However, the opposite of friendly sales techniques seemed to be the case when I saw how one man was being sold a suit from one of the clothing stores. The stallholder was being somewhat aggressive toward his customer and the two appeared to be arguing over what size of trousers would fit the customer, it seemed obvious that the stallholder didn’t wanted to lose the customer due to not having his correct size available. Unlike the vegetables stalls, a suit would be a one off purchase therefore the use of aggressive sales seems to be more appropriate.

On the second day of the field trip we moved further into London to see Camden.

On the surface, Camden market seemed radically different compared to the experience of Walthamstow the previous day. The markets here seemed more driven by novelty commodities for a more tourist-focussed customer base rather than the practical items that were found in Walthamstow. 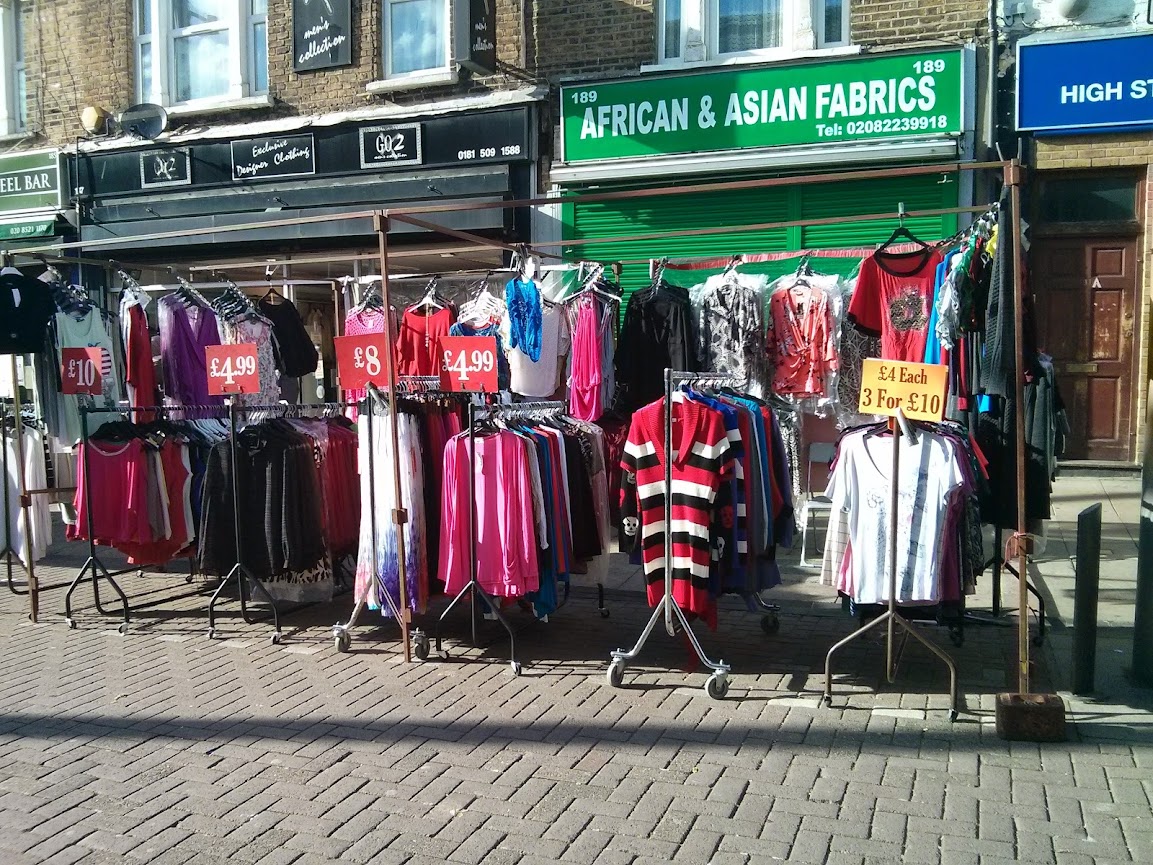 The most interesting thing about Camden market is its reputation for being a site of alternative culture – a reputation that is has had for quite a few decades. However, there is a sense that as time progresses the market has grown to a point where competition from other vendors has prompted the importing of mass produced goods from China and selling them still with an alternative image despite their origins. For example, the Che Guevara and Rastafarian memorabilia is sold by Afghans who have little or no connection to these things but recognise there’s a market for them within the context of Camden. As Werbner wrote, “In order to function, in order to market their goods globally, global elites must understand local cultures, must ‘engage with the other’ even while they sustain their exclusive transnational networks. In this respect local ‘cultures’ are at least in part the product of extra-local construction. Globalisation is, at least in part, a business strategy for adapting one’s goods to local conditions” (Werbner 1999, pp.18)

For many customers the fact the produce is mass produced might have little impact on their decision to buy it. These mass produced items can still display the alternative imagery and messages just as effectively and may not always be contradicted by the fact they are commodity items created and sold for the sole purpose of profit. This is illustrated by Hannerz who wrote about the cosmopolitan’s acquisition of other cultures, “A more genuine cosmopolitanism is first of all an orientation, a willingness to engage with the Other. It is an intellectual and aesthetic stance of openness toward divergent cultural experiences, a search for contrasts rather than uniformity. To be become more acquainted  with more cultures is to become an aficionado, to view them as art works”. Unlike Walthamstow, Camden market stalls appeared to serve this cosmopolitan sense of cultural identity that Hannerz makes reference to. 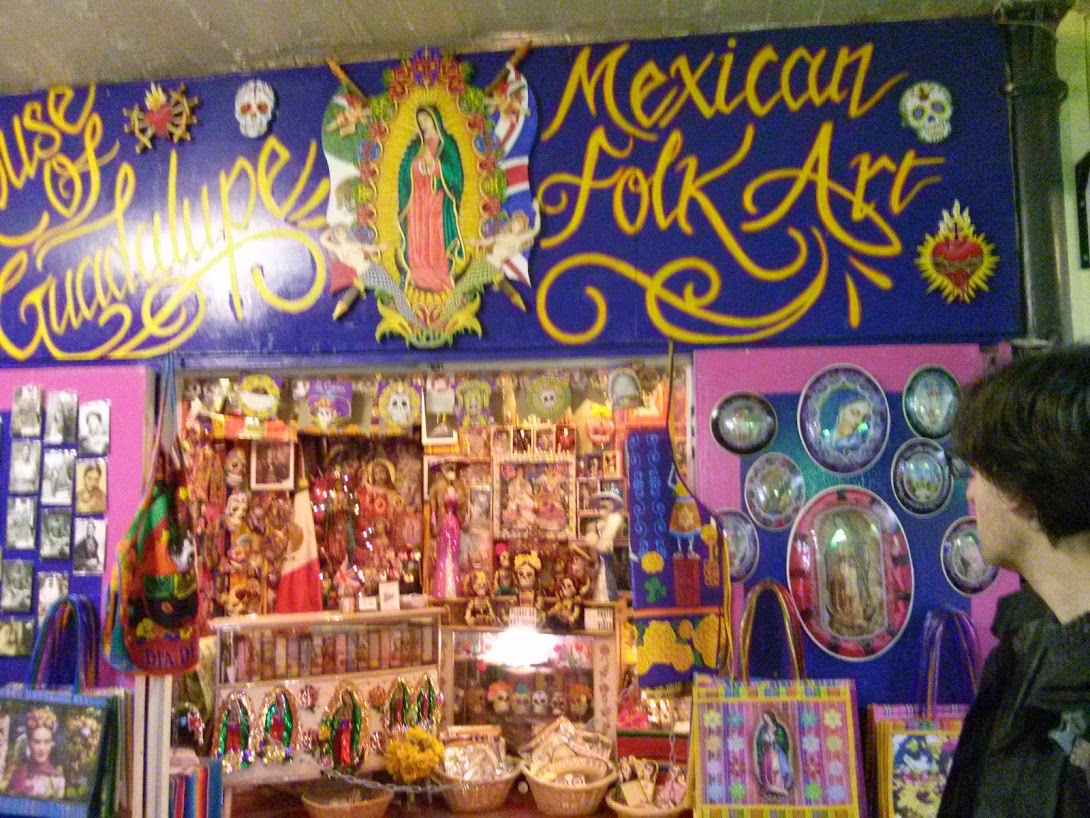 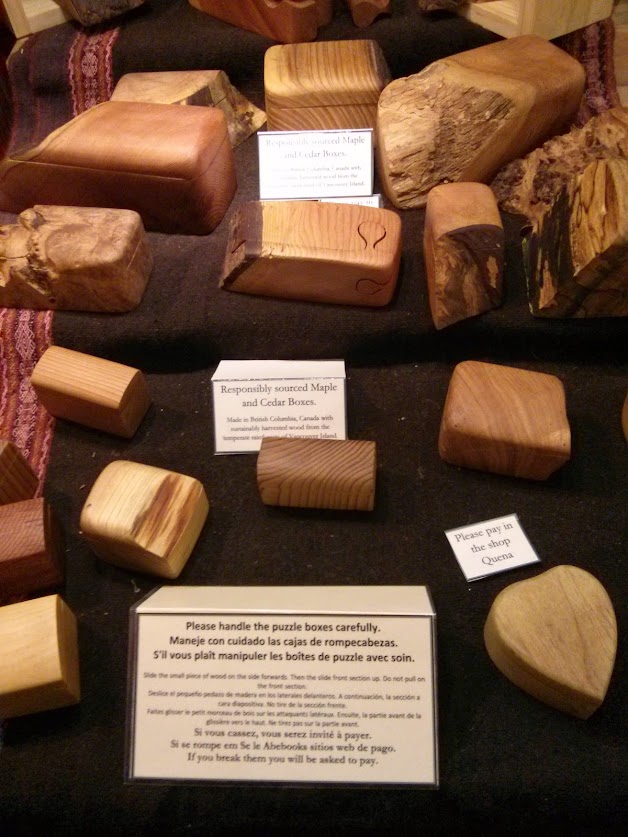 Whereas the Walthamstow stalls sold items that served the specific cultural needs of locals, the items for sale in Camden were more romanticised commodities and artworks that were marketed towards the more cosmopolitan customer. But as Hannerz adds, “Yet the surrender is of course only conditional. The cosmopolitan may embrace the alien culture, but he does not become committed to it. All the time he knows where the exit is” (Hannerz, 1990 p.240). In saying this he is putting into question the extent to which a person can fully adopt another culture and highlighting the ineffectiveness of achieving this through consumption.

London is a city with a diverse street market scene. Whilst some markets are there to serve the specific cultural needs of local ethnic groups, others sell more novel commodities aimed at tourist types who might want to express some cultural diversity. The type of people who run the stalls also reflect this level of diversity and come from areas that way not necessarily reflect the products they are selling but recognise there’s a market and adapt to it. The goods, whilst often expressing some form aspect of other culture’s are often times mass produced and part of the global trade system.